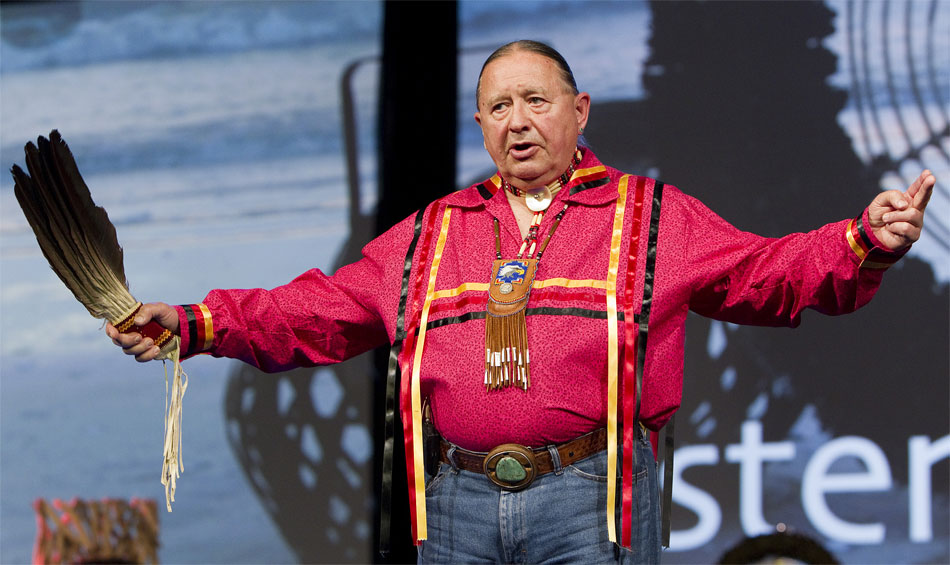 The Rev. George Tinker preaches during an “Act of Repentance toward Healing Relationships with Indigenous Peoples” on April 27 at the 2012 United Methodist General Conference in Tampa, Fla. A UMNS photo by Mike DuBose.

Over the last few years I’ve had the opportunity to spend a fair amount of time writing on the Doctrine of Discovery (DoD).  The DoD, while it has yet to have little exposure in our schools or seminaries, drives much of how we think culturally and socially.  In developing my thoughts concerning the DoD, one theologians writing, George Tinker, pushed me to question how Christianity endorsed the subjugation of American land and people and how that subjugation often lead to genocide.

Between the Ridges, a local Ecumenical Collaborative of the Yakama Christian Mission—Christian Church (Disciples of Christ), White Swan and Toppenish United Methodist Churches, and Christ Episcopal Church have had the good fortune to obtain grants and raise monies to have George Tinker bring his gifts and insight to the Yakama reservation.  Below is a Flier/Write-up speaking to opportunities to hear Tinker.

Between the Ridges, an Ecumenical Collaborative on the Yakama Indian Reservation is sponsoring a day of conversations with George Tinker.

George E. “Tink” Tinker is a prominent American Indian theologian and scholar, author of many articles and books.  Tinker is professor of American Indian cultures and religious traditions at the Iliff School of Theology in Denver, Colorado, where he has taught since 1985. He earned his doctorate in Biblical studies at the Graduate Theological Union in 1983. He is also an ordained Lutheran pastor of Living Waters Episcopal/Lutheran Indian Ministry in Denver. Tinker is a member of the Osage Nation, and is also on the leadership council of the American Indian Movement of Colorado and director of the Four Winds Survival Project.

Tinker’s works can be categorized into many areas. Missionary Conquest: The Gospel and Native American Cultural Genocide critiques how the Christian church and its missionaries, regardless of best intentions, were complicit with the cultural, political, and social genocide of Native Americans. Spirit and Resistance: Political Theology and American Indian Liberation is concerned with eliciting the difference between Native American and White cultures and providing a critique of White categories of thought. A Native American Theology explains how Native American cultural symbols can be used to re-interpret Christianity. Throughout all Tinker’s work he is concerned with the health of the environment, the recognition of communal, not individualistic, values, the importance of being tied to the land, and the interrelatedness with all of Creation that comes with living in a spatial, communal attitude.

Two opportunities are scheduled.   A free will offering will be taken to support these events.

Dr Tinker will have just led the National United Methodist Church through a season of repentance at their national convention in Florida.  The World Council of Church’s Executive Council has recently repudiated the Doctrine of Christian Discovery, a series of papal bulls and theological statements that justified the 15th Century Age of Discovery and unpins the current legal framework of international property law, tribal treaties and the dominant culture’s relationship with indigenous people.  Also in May the United Nations Permanent Forum on Indigenous People will have the Doctrine of Christian Discovery as the main theme for their international conference.  This is a perfect time to learn more about the history of Christian mission and do the creative work necessary to explore a way forward beyond theologies that justify oppression toward a new vision of the church’s role in standing in solidarity with First Nations here in the US and with indigenous peoples around the world.