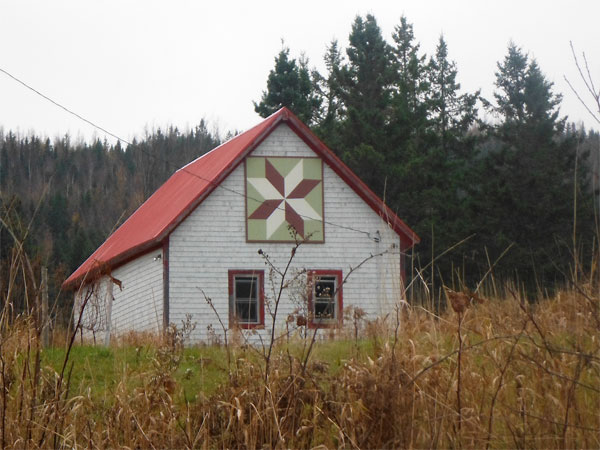 We were driving through the Nova Scotia countryside in November taking in farms and farming practices. The practices and work we saw was much like the work of small farmers back home. Most farms were multi-crop in addition to dairy, beef, goats, or sheep.

The workers of the land told a story of animal health and land balance. Dairy and beef farms did not hold thousands of animals, but like crop acreage, were in the tens and hundreds. The farms we drove by were much more like the farm of my mother’s youth than industrial feedlots and mono-cropland found across the US. Rather than miles of feed bunkers with animals living in mud and manure, Nova Scotia animals were on pastures.

We traveled a two-lane road without a centerline. Rolling hills transitioned into wooded land and the landscape steepened. Soil held fast with grass pastures in cleared homesteads. Harvested corn stalk covered a few acres on most every farm. The fenceline opened upon a two-story, 1920’s or 30’s home. White, with a small porch sporting styles, rails, and posts, the home spoke a carpenter who did not hurry his work. Fifty feet or so away, a white barn rose out of the ground. The wife and husband walked in rubber mud boots, topping out just below the knee, toward the barn in. A dented galvanized bucket swung in her left hand and his right arm wrapped was around a sack of feed.

We stopped. The feel was a familiar. When someone we do not know shows up at the farm, Belinda and I wonder what is going on. The same feeling was in the air as we approached the farm couple. Like anyone showing up at the farm back home, the first question that must arise is, “are they lost?” Yet, it is Nova Scotia and not central Washington, so it may be just as normal to ask, “Tourists?”—I’m not sure, do folk visit Nova Scotia to spend days driving the countryside? I hope so.

The farm showed the age of a generational place. The barn was tight with a white paint job that was probably seven to ten years old. New paint laying upon old chipped paint told the generational story. Far from new, all was well kept and clean, though the barn had a feeling of growing out of the ground.

The farms landscape mattered to these folk. This was not a life of making of money, though financial sustainability mattered, but a life of living simply and well. Living on the land—even in the muddy season, keeping good quality hay in front of the cows, putting up with shifting milk prices, and the forever maintenance, seemed to be as much about living for those who had been and those who are to come.

We pulled back onto the two-lane, no centerline, road. Blue of sky was giving way to slate clouds. Rain would come before long and rubber boots would not go without want. As the white house and barn faded in the rearview mirror, we spoke of a landscape justice that comes from well fed cows living free on pasture and two people who love their land, their animals, their barn and home, and walked beside one another with a dented bucket and a sack of grain.