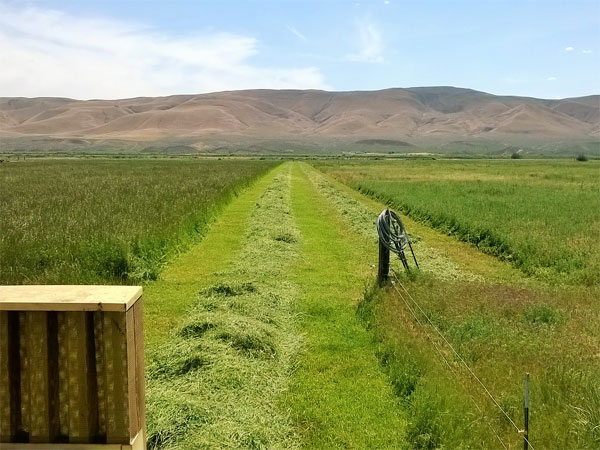 Folks in Jackson County, Oregon are having a fit. The people of Jackson County voted last fall to ban GMO (genetically modified organism) crops. Alfalfa growers are ticked off. Lawsuits are filed. Having planted “Roundup Ready” alfalfa, a perennial plant that is productive for years, GMO farmers claim a potential devastating income loss.

Roundup Ready crops like alfalfa allow farmers to spray their entire field with Roundup (imagine a crop-duster plane), killing the weeds while leaving the resistant crop alone. Some folk argue there are problems with the GMO plant itself and they don’t want it fed to the livestock of they eat or provide their milk. Others question what widespread, non-specific spraying (of any type really) is doing to the soil, water, and air. Interesting enough though, is in time the arguments may mean little because weeds are developing an immunity to Roundup. Which might mean that about the time GMO alfalfa is normalized, Roundup will not be effective, and chemical companies will have developed a new herbicide.

There are alternatives though and I hope folk begin to recognize them. I’m not wholly against herbicides, however I am against wholesale use with little regard for tomorrows folk who must use this same land. Farmers could decide to quit large-scale herbicide use and accept a few more weeds and a little more work, and the consumer could pay a little more for their food. However, this would call farmers and consumers alike to change their practices. Alfalfa wise, farmers would have to learn old practices of allowing weeds to go as far as developing a seed head and then cutting their crop before the seed ripens. Done well, the plant (often) thinks it has reproduced and does not therefore put another seed head on. In time, the number of weed plants in the field reduces. They may never go away, but then that seldom happens with herbicides either. So, because plants are plants, doing all they can to survive, it means the farmer has to learn that a few weeds in their product is okay. There is one big consideration, caring for alfalfa in such a manner will likely lead to an additional cutting, which translates to more labor, more diesel, and more tractor maintenance. Therefore, no GMO alfalfa means more expensive alfalfa. Which means the consumer must pay more for their food.

If there is anything harder than changing farming practices, it has to be consumer practices. By now many folk know they are no longer eating real food. Their bread, beef, pork, kale, chicken, spinach, lettuce, tomatoes are more this side of cardboard than the full flavor that comes with naturally grown plants and animals, but you would never know it by consumer practices. Each year, locally, we get another two or three fast food joints, and this is in a landscape where folk should know better. However, local folk are educated the same as everyone else—by fast food commercials. Consumers complain and argue about GMO production, but real change comes when folk choose to eat differently.

Folk in Jackson County can vote to ban GMO products all they want, but real change isn’t going to happen until each of those same voting folk change their own eating practices and begin paying more for real food. Pay more means folk must grasp good beef, good milk, good lamb, and good goat means GMO free alfalfa and GMO free alfalfa means higher cost food. Eating differently in turn means learning the appropriateness of cutting back on the amount of food eaten at each meal: A four-ounce steak rather than a sixteen-ounce, or a quarter-pound burger rather than a double decker.

To end GMO products, folk will need to actively engaged in the food they eat. A vote for a GMO-less county is a start. Now it is up to Jackson County folk to change their eating practices.

2 thoughts on “GMO And Cardboard Food”