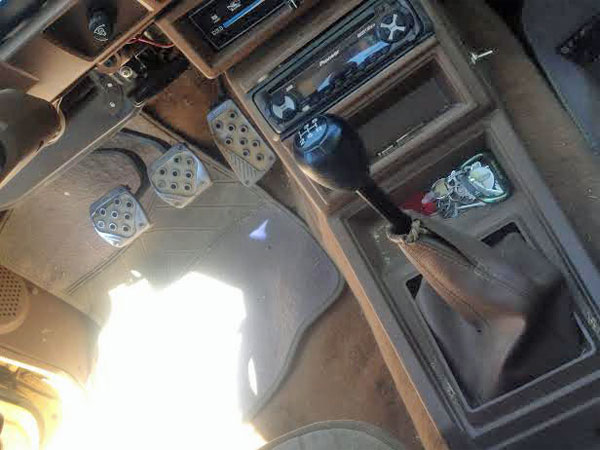 There it sat, promising it could get me to where I needed to go if I only had the patience – a 1986 Nissan pickup truck.

The yellow paint was faded with age. The trunk suffered from something similar to tendinitis. The steering wheel sometimes took a bit of muscle, frustration, light perspiration, and mumbled swear words to turn. The driver’s side door was temperamental, refusing to lock from the inside and only locking from the outside when it felt like it. Despite all of this, though, the old King Cab had some fight left in it yet.

There was only one inconvenience keeping me from eagerly taking it for an exploratory ride around Yakima County. The little yellow intern truck David and Belinda Bell had lent me for the summer had a manual transmission. Since I only knew how to drive automatic, I knew I had some learning to do if I was going to be a productive intern for the Yakama Christian Mission.

I was suddenly sixteen again. Every driving skill I mastered in the last five years was set back to a beginner level. It was more than the difficult aspects too, such as driving in reverse or doing a three-point turn. I couldn’t even press the gas without making the truck jerk, sometimes stalling in traffic. My face would turn the same shade of red as whatever stop sign or light I had jerked to a standstill in front of that day. Each time, I felt like the truck was taking me by the shoulders and shaking me in frustration. My goodness! Get your act together. What an embarrassment.

The truck wasn’t the only one frustrated. I wanted to shake the truck back. “Don’t you think I’m trying?” I mentally retaliated. “Give me a break! This isn’t as easy as it looks.” Then my left foot would prematurely depart from the clutch and the truck would stall again. I smacked my forehead against the stubborn steering wheel several times.

To my relief, I did learn how to drive a stick, even though I still jerk the truck a little every once in a while. I’m glad I was able to learn this new skill because the experience taught me something else. It reminded me of the anecdote, “If you give a man a fish, you feed him for a day. Teach a man to fish and you feed him for a lifetime.” It was exactly what David and Belinda had done for me. I needed transportation, but instead of driving me everywhere, these people were willing to take the time and resources to provide me with a truck and teach me how to drive it.

Isn’t that what I as a Christian should be doing as well?

A friend once told me that if someone helps another person with a problem, but that person still has the same problem the next day, then nothing has been solved. Many Christians and churches act the same way. Food banks, homeless shelters, charity secret Santa programs – these are all important acts of kindness, but ultimately they do not solve anything. The people who go to the food banks will still be hungry the next day, the homeless will still be looking for a place to sleep the next night, and the families that receive the charity will still lack the money to afford gifts for the next Christmas. Hardly anyone is eager to help these people find jobs or homes when it is so much easier to give them a sandwich or a bed and feel like we’ve made a difference.

We as Christians need to learn that it’s not just the work we’re doing, but what we are learning and teaching others that will change the world for the better. When will we learn that we need to teach a man to fish or teach a girl to drive? Not only that, when will we learn that we need to teach others to do the same? We also need to change our attitudes towards these people who need help. As difficult as it was for me to learn to drive stick, it’s even more difficult for some people to find jobs and homes. Clearly we need to change our way of thinking and acting. If we don’t, then the unjust system that we live in will never change.

This is why I applied for the Disciples of Christ internship program. I want to learn how to change the world that we live in and I want to teach others what I learn. I am willing to do whatever needs to be done to accomplish that goal, even if it means the first step is learning how to drive stick.

So, I will get in the old yellow King Cab, faults and all, and drive my way into a better society, hoping to inspire anyone I meet along the way to do the same.