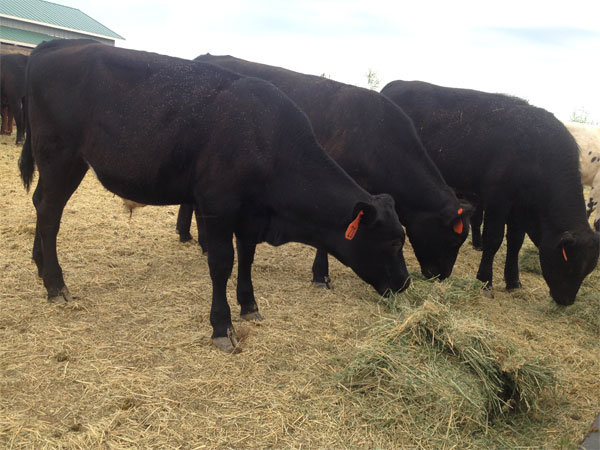 This is supposed to be humane? I thought to myself when David Bell took me to the cattle auction for the first time. He wanted to take me the first week I arrived so I could handle it better once we brought workgroups. I’m glad he did so too because I was on the point of tears.

Cows, bulls, steers, heifers, all corralled into small spaces, running into each other, stumbling over one another. The cowboys and girls on their horses chased after them with paddles, flags, and whips to move the animals along. One cowboy even yelled, “Hey! You son of a bitch. Hey!” over the desperate mooing as he tried to force an extremely frightened steer into a corral.

One beautiful, brown steer with a white face met my gaze with tired eyes as he struggled to maintain his footing against the many other, larger cattle around him. He didn’t fight back or try to escape. He had clearly been there all day and gotten used to the circumstances. Perhaps he had even been there before. His calmness told me it was indeed humane.

The paddles, whips, or flags weren’t hitting them; instead, they were only surprised by the sound made by the instruments. They had some space to move. They were fed and kept healthy until they were sold. The animals freaking out the most were the ones who probably hadn’t had a day of stress in their lives, who were raised on pastures with their families. Plus, it’s understandable for the cowboys and girls to get frustrated every once in a while, but most of them were patient with the animals. The place really could have been a lot worse. In fact, many of cattle would later go to worse places, to factory farms or concentrated animal feeding operations (CAFOs) where they would spend the rest of their lives standing in a pile of their own shit. They would get even less exercise, they would get fatter, and they would sell for more.

Suddenly, I cried the tears I had been fighting, feeling helpless. As a vegetarian, I know I don’t support the CAFOs or factory farms, but people who do surround me. Plus it’s more than just cows, or even pigs and chickens. It’s all food. Ridiculous amounts of water is used to raise almonds; the soil to grow corn has been stripped of its nutrients; pesticides affect the majority of food raised; and farmers are paid unlivable wages for the incredible amounts of hard work they do. I’m surrounded by a capitalist government that cares more about the money going from my hands to its pockets than the food going from its hands to my stomach. Clearly, being a vegetarian has never gotten me fully off the hook.

That’s how great the lack of food justice is in our society.

Now that the summer is almost over and I’ve had time to reflect on these thoughts and emotions, I decided that I refuse to give up. I know there are humane places like this cattle auction or places that are more humane. There are farms that care about the animals they are raising and the food they are producing, who care about food justice. The JustLiving Farm is only one example. The obstacle is that I have to do my research and find them, especially now that I’m going home, back to the city where I have to go out of my way to find a farm. I can’t just go to the nearest Wal-Mart and pick the cheapest item on the shelf. Nevertheless, I’m willing to take that challenge.

Now, I know it’s unrealistic for everyone to fully support these kinds of places because they’re not as cheap, but that’s where privilege comes into play. This summer I’ve realized that everyone has some level of privilege, which will always be less than or more than somebody else. So based on our levels of privilege, we can support these places as much as we can. As a result, I honestly believe that the more we support the right kind of places, the more they can grow. It may not be the perfect solution, but it’s a start. Little by little, the justice will spread, but it will take generations.

I’m starting with mine.